(or what NOT to do on location)

Directing Factual Television is not all slurping coffee and shouting “Action” from the warmth of your hire car. Well not all the time.

Of course there’s scripting, logistics and deciding on the look.  But mostly it’s herding contributors.. dealing with conflicting egos… coping with the weather.

So how to make it all go smoothly?  Here’s my Television Directing Top Seven* list of things NOT to do.

Never used a clapperboard in my life… 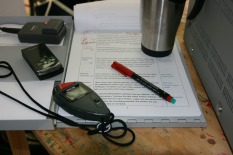 The Director is the boss. You are in charge of everything. The location, the budget, the look on camera, safety, what time we break for lunch, oh and the script.  BUT if you ever have to tell everyone you are the boss… say it out loud… then you have lost it. They will look at you. And inside they will have no respect.

If they can’t get it after the first four or five, they probably never will.  Maybe it’s something about the words that needs to change to help them. Maybe change the walk or the backdrop. Maybe they just have something else on their mind. Whatever.

I think it’s Neuro-Linguistic Programming, that says if you keep repeating a “failed” action, you are effectively training your brain to keep doing it that way.  Same applies to a tennis serve, or playing a tricky piano score. Best take a break, change something about the approach and freshen it up.

Also. Think how demoralising it must be for the presenter to be humiliated a dozen times 😉  And how negative they will feel when they come to do the next PTC.

3- Drag everyone out in the rain.

(and force them to do whatever you had planned…)

A few years ago I travelled 140 miles to shoot some pick-ups with a family on their small holding. Mum could dig out the duck pond. The kids could find eggs laid under hedges by their free range chickens. You get the picture.

When I got there it was pouring with rain. Stair-rods. You couldn’t stand in it for two minutes without getting soaked. But I’d travelled all that way, and I needed the shots. Yup. It’s TV and I’m the Director!  I got the family to put on their wet weather gear and take it in turns to do their activities while I filmed.

Got back to the edit to view the rushes. They all looked miserable and drowned. Never used a single frame.

Seriously. Scheduling a lunch break at 12.30, and then over-running to 3.30pm. It’s a worse crime than not scheduling one in the first place.  Let’s face it camera crews, and often presenters, work well not just when they are fed. But when they KNOW what time they will be fed.

I was due to Direct a short film for a BBC programme, with a presenter I’d never met before. The day before the shoot, there was a row between the presenter’s agent and my Series Producer.  The agent was demanding a one-hour lunch break on every filming day because the “stroppy” presenter had complained. I had a really full day planned, and a whole hour for lunch would really scupper the shoot. Plus most of us would rather have a quick bite to eat and get on with the work. So this looked like a painful day ahead.

Then I heard the presenter’s side. The previous director promised lunch at 12.30. But they filmed through…then drove to a new location …and filmed some more.  It got to 3.30 and still no food. The presenter was starving. And not surprisingly annoyed.

Communication maybe? Ten minutes for a supermarket sandwich and an apology would have sorted it.

5 – Think you can do everything:

I once went on a course in managing yourself… run by a former builder. He told a simple story of a bad manager, who oversaw construction of 12 new houses. On the grand opening day, they realised the toilets in three show houses were not working properly, and the plumber had left. Luckily our manager knew how to fix them and he spent the day doing so. So when the Mayor and dignitaries arrived they were greeted by a sweaty man, in filthy clothes who claimed to be the site manager…

“We’re not making flamin’ Ben Hur” was an oft repeated jibe from one mainstream presenter when he thought his director was taking too long over particularly arty shots, or PTC set-ups. Fiddling with the set dressing. Rehearsing camera moves. Sure it’s not Ben Hur – but it’s YOUR film. And sometimes you need to pull out all the stops to make it work. The director decides how much material they need, and how much pizzazz to put into each shot. So don’t let ANY hurry-hurry people put you off your stride.

Good directing means making decisions. And getting on with it. You’re the team leader. You need the whole team to believe you know what you are doing. Even when you don’t. It’s no good wavering over locations for PTCs, or re-taking an interview because you can’t decide if it should be standing still, walking or seated. You might ask a good professional (camera op for example) for their input. But you certainly don’t keep phoning the Producer. Make a decision. Lead the team. You will make mistakes. But no-on will die.

Coming soon: I’d love to discuss the ethics of contributor consent in factual TV. What is “rolling consent” and when should you let contribs view a programme  before transmission (if at all).